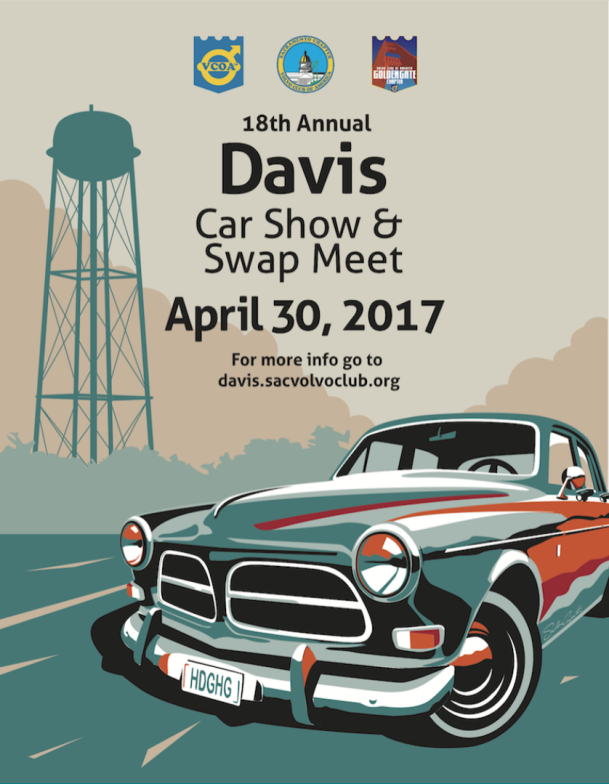 After being on hiatus for 2016, the Davis Car Show & Swap Meet weekend returned triumphantly for 2017.

On the evening of Friday, April 28th, I packed my bags and climbed aboard in a 1985 Volvo 245DL with my friend David, and headed out to the city of Davis, CA. When we arrived at the Motel 6 in Davis, we were greeted in the parking lot by fellow Volvo enthusiasts. Several members from the Turbobricks online community are hanging out in the parking lot, looking over each others’ cars. We socialized a little bit before deciding to call it a night and get some much needed rest for the early morning the next day.

Saturday morning came bright and early with a short drive out of Davis and into Sacramento for a “Cars and Coffee” style get-together. With everybody gathered in a single place for the first time, the size of the event was becoming apparent. Volvos of all kinds were represented, from well-kept, classic 1800s to a V60 Polestar, highly modified 240s and more. People were walking around, inspecting engine bays, discussing modifications and variations, spending time with old friends and making new ones alike.

To cap off our casual get-together, Gary Sellstrom started the weekend’s numerous raffles. He explained that for the Saturday, raffle tickets would be given out at each event throughout the day, giving people numerous chances to win prizes. Gary also hosted a driver’s meeting leading up to our Saturday drive.

For the drive, cars were be split up into two groups, one fast and one slow. The slow group took a less technical and more scenic route, while the fast group took a more challenging one so that drivers could get the opportunity to experience their car’s performance. The slow group was led by Gary Lodge in his 122, and the fast group was led by Gary Sellstrom in his modified 745ti.

The drive took us through some beautiful northern California scenery. I rode again with my friend David in his modified 245DL, holding on tight as we carved through the Sierra Nevada foothills to the sounds of turbos spooling and tires grabbing at the road.

After the drive through the foothills, everybody convened for lunch at the Old Spaghetti Factory in Rancho Cordova. We were led to a reserved room just for our group, and enjoyed a nice lunch together. In the parking lot following lunch, another raffle was held as well as an invitation to participate in Karting at K1 Speed.

For those who wanted a more competitive driving experience, we headed to our karting session at K1 Speed Indoor Karting in Sacramento. The drivers were split up into two groups and each did a qualifying race and a final race.

Following lunch, chapter president Walter Donnell hosted a casual BBQ get-together at his house in Sacramento. Walter graciously let people gather to socialize, wash their cars in the driveway, and cook up some food for dinner on the grill. To celebrate Walter's birthday, there was even a Volvo-themed cake with plenty to share.

On Sunday morning, the city of Davis was once again awaked to the sound of Volvos firing up and filling the streets. Every road leading to the entrance of the show was backed up, and once the everybody had parked we had an official count of 157 cars, the most in the event's history, with even more parked outside of the show.

The car show on Sunday was a great opportunity to take a closer look at all of the cars present. There was a wide range of cars both old and new, and nearly every single model was represented. Including, for the first time ever, two P1900s! Some of the standouts included a 6 cylinder whiteblock swapped 240, a Volvo Amazon LeMons race car appropriately adorned in the Amazon logo, and even a Volvo-powered Toyota Hilux.

In addition to the car show itself, a section of the park's parking lot was also reserved for for swap meet. Enthusiasts brought out tables and filled them with parts, even overflowing into neatly organized piles on the ground. There was a wide array of items for sale, from sets of wheels to replacement lights, gasket sets to service manuals, and everything in between.

Several of the shows sponsors also set up swap meet areas where they offered up products and services like powder coating and laser cutting.

There were 23 official sponsors for the event, a new record! Many of them were present at the show, showing off all kinds of products and services, including powder coating, laser cutting, turbo kits, flash tunes and lots more. Sponsors of the show also donated several thousand dollars worth of raffle prizes for Sunday's event.

Another change made for 2017 was the judging. In lieu of official judges, the car show awards were now done entirely by community choice. Awards were handed out for first and second place winners in each category, and there were more focused categories than years before.

All in all, Davis Meet Weekend 2017 was a resounding success. A weekend full of fun, friends, Volvos and great weather to help remind what the Volvo community is all about 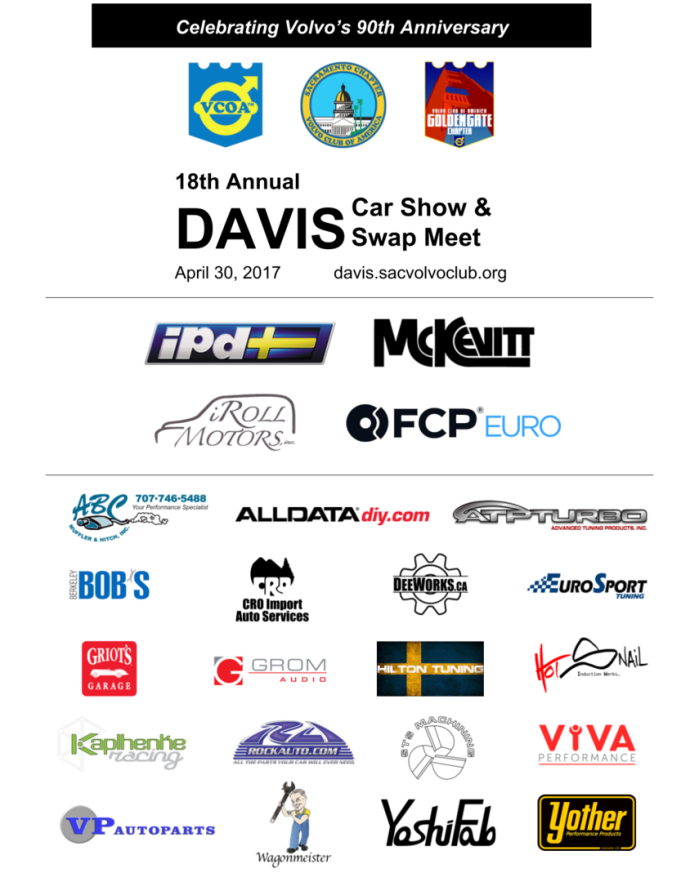